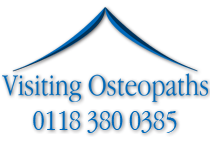 Why did I become an osteopath?

As an osteopath I get to take a lot of my patients’ case histories to discover the root cause of their problem. Conversation usually drifts at some point to how I got into osteopathy and I give an abridged version of this story. Enough people have asked recently so I thought I’d give the full story.

At 17 I was heavily into parkour and body building, which rarely makes a good combination. Muscle weighs a LOT, and at 6ft 1” I was far too heavy to be flipping myself upside down on a regular basis. I racked up a heap of injuries including two dislocated shoulders, several fractures and many, many muscle strains. If it wasn’t for A+E and physiotherapy I would not have been in any shape to continue, then one injury changed everything.

One day on Dover beach after a long parkour session I performed a kip-up, I didn’t kick out hard enough and landed badly. Something twanged and I couldn’t walk for an hour without intense pain.

No I do not perform kip-ups on request, I like my knees now!

I still found it difficult to walk for a few days after and noticed clicking in the knee, but no weakness. In order to treat the symptoms I purchased a knee support from a pharmacy (one that did not have a patella hole for my kneecap). Wearing the knee support for my waking hours helped to keep the pain at bay, I hoped it would go away but after a year with no change in symptoms I realised that it was just getting worse.

My GP was the first point of call, who referred me for an appointment with a consultant. Six months later the consultant looked at my left leg (and only my left leg), then accused me of being a liar, yet was referring me for a scan anyway. He had assumed that it was a cartilage problem and when I told him that his tests didn’t hurt he must have thought I was just trying to get time off work.

In between my consultation and MRI a shoulder dislocation (backflip onto my neck from a 5ft vault – it’s a miracle I wasn’t paralysed!) led me to see a physiotherapist. Unfortunately she couldn’t figure out the knee condition, but did a great job helping to undo the damage to my shoulder.

Fast forward another 6 months and I’m having an MRI scan in the back of a mobile scanning unit. Once again they only scanned my left leg. I was told in a subsequent session that the knee showed signs of a cartilage tear, I was so relieved that I had an answer after a year.

Another 6 months (I was low on the priority list, clearly) I was being prepped for an arthroscopy to remove the piece of cartilage that was causing me such discomfort. By this point I was in pain after walking 10 metres in the winter and my knee felt like it belonged to an 80 year old. Twenty minutes before the operation I was pulled aside by the consultant who said that the MRI was of such low quality (his words) that the cartilage diagnosis was incorrect and the technician hadn’t read the image properly, but that they would “put the camera and claws in anyway” to see what was going on.

After my post general anaesthetic grogginess had worn off I asked what the results were and discovered nothing had been done. The cartilage was fully intact, no tears or wear and tear. I was elated and devastated at the same time. Off I hobbled with bandages and crutches to figure out my next move.

I had already met my osteopath Paul from a smaller injury a couple of years back and we got along well so I dropped by when in town a couple of weeks later for a catch-up. He asked me to remove the bandage in order to have a look at the sore area. It needed to come off anyway so off it went and I rolled the trouser leg up. “Umm” and “ahhh….” followed, then “now roll the other trouser leg up please”. I was confused, the GP, consultant, physio and other practitioners hadn’t needed to look at my good knee, but what the heck – I trusted him so did as asked.

“I can see the problem right there, your knee support has caused the muscles in the left knee to weaken, so they aren’t allowing your kneecap to move properly”. Music to my ears. My Vastus Medialis had atrophied (shrunk) because the knee support was doing the work for it and Paul had diagnosed it without even touching my knee. His diagnosis explained why it hurt when I took the knee support off, but not when it was on. It didn’t explain what the initial injury was, but 18 months from the incident meant it was most likely healed anyway. 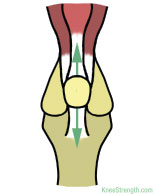 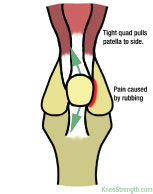 Patella maltracking means the kneecap is pulled against one of the femoral condyles, causing pain by rubbing. Image © Kneestrength.com

Two sessions of osteopathic treatment followed to relax off the outside knee muscles and rebuild my Vastus Medialis muscle with great success. At the time of writing this blogpost I haven’t had knee pain in nearly ten years and try to keep on top of my exercises as much as possible. I’ve calmed down on the parkour and body building (much to the chagrin of my girlfriend), to prevent any recurrence.

The important lessons I took away (asides never calling a patient a liar) was to consider the body as a unit, that symmetry is important and that therapies that are considered ‘alternative’ or ‘complementary’ should sometimes be given credit. This was the beginning of my journey to becoming an osteopath and 6 years after finishing my 4 year degree I can definitely say that it was the best decision I made in my younger years.

To be clear I have no issue with the care I was given in the NHS (except the rude consultant). The doctors and nurses were top class and given my history of 10+ fractured bones over my clumsy youth (another blogpost another time perhaps) I would not be walking straight without the A+E department in Dover’s Buckland hospital. The reason they couldn’t find anything wrong was to do with their teaching. Very few health specialists are taught to be holistic and consider the musculoskeletal system as a unit, as opposed to looking for existing symptoms. That is where osteopaths can help; your neck pain may be caused by restricted movement in your lower back, and your lower back pain may be caused by tight hamstrings.

Just had my first appointment with Matt from Visiting Osteopaths and I am delighted with the results. The session took place in the comfort of my own home at a time that was convenient (less than 24 hours after I called). If like me you suffer from pain and lack of movement, then give them a call.

MATT WAS AMAZING, VERY PROFESSIONAL AND FRIENDLY. HE SORTED OUT MY ISSUES VERY WELL AND I AM WALKING WELL ONCE AGAIN. THANKS MATT.